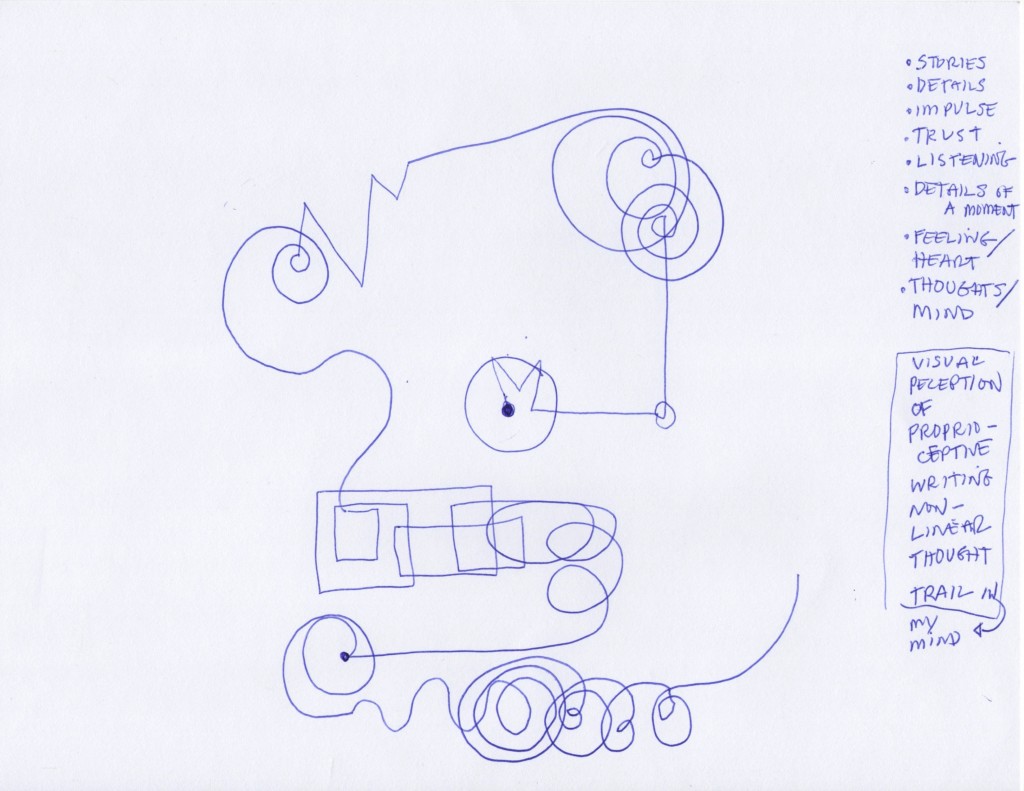 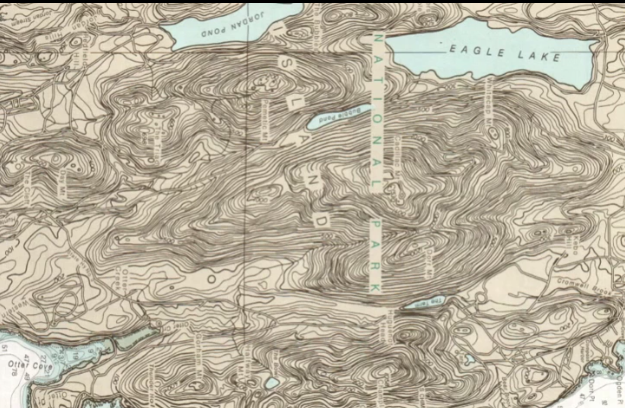 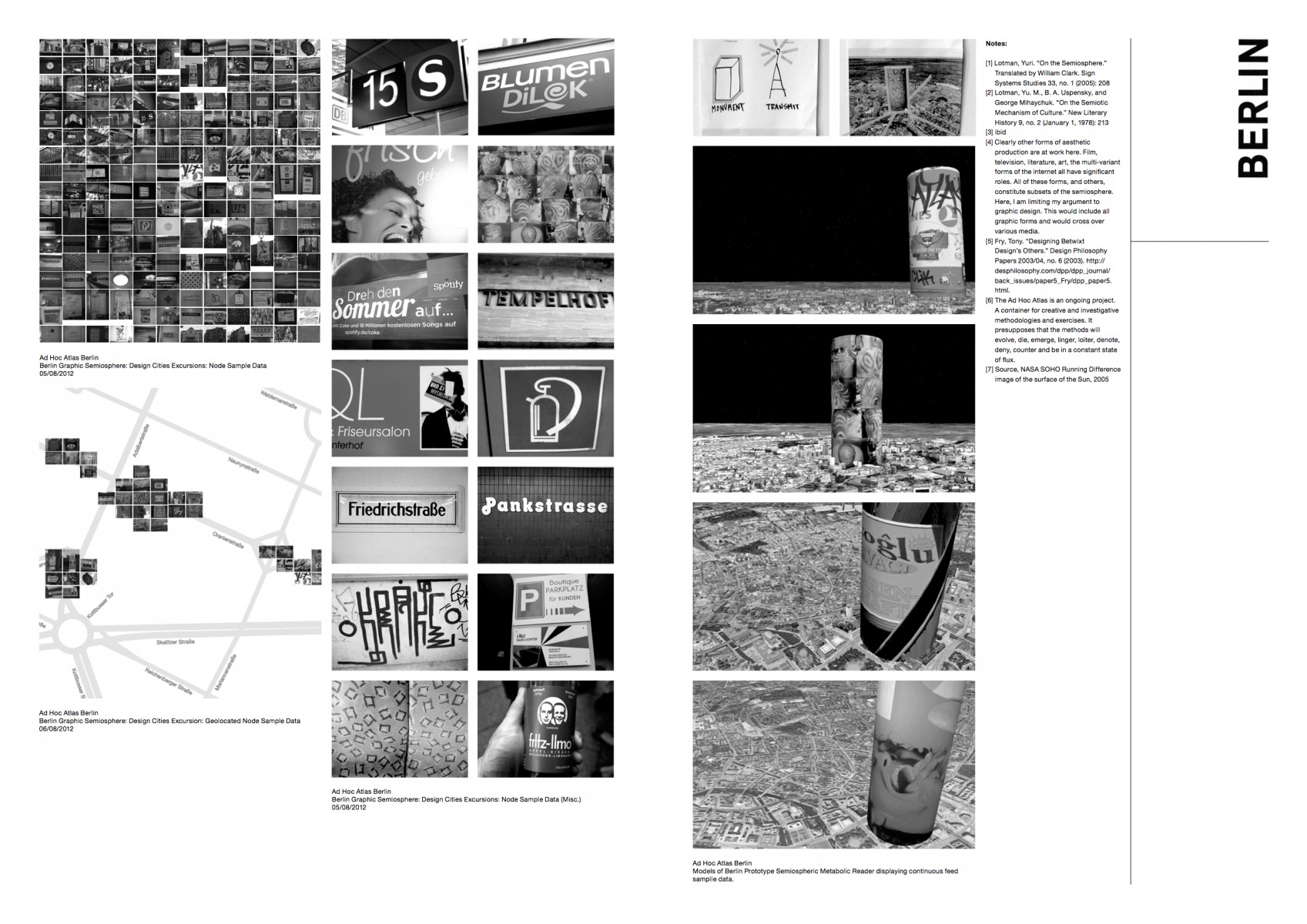 Are you looking up?

Geological time is deep time and geological space is deep space. Yet humans are short-sighted and willingly or subconsciously stifle the wild and weird geological rhythms.  Thinking we are above it or outside of it or it just not part of it, and if we ignore it with all our might it may just not be there. 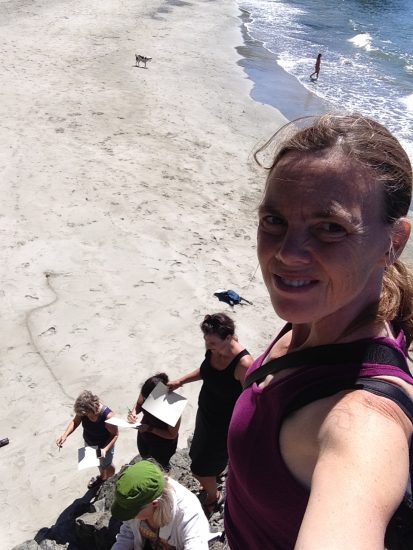 At the same time and in part through the same myopic mechanism, human activities are exerting increasing impacts on the environment at all scales, in many ways outcompeting natural processes. A new geological epoch, “The Anthropocene” (Crutzen, 2002), is the therefore proposed for the most recent period in the 4.6 billion years of Earth planetary history. In the International Chronostratigraphic Timescale, the conventional start and end of geological time periods (eons, eras, periods, epochs and ages) are distinct boundaries in the geological record (rocks and sediments) indicating relatively abrupt changes and specific transitions in evolution, extinction, climate change, geochemistry, magnetic polarity, etc. Only boundaries that can be determined precisely and globally allow effective communication between scientists, and within the general public (Gibbard & Walker, 2014).

Therefore, when the earth layers (strata) speak to us we can speak about the earth.

The message from the planet is that humans brought upon themselves changes to the functioning and character of the Earth System (Waters et al., 2016). These changes can be detected in rock, sediment, and ice core strata that are distinctive and rich in geological detail about the human influence, through including such things as artificial radionuclides, plastics, metals, pesticides, fire retardants, and concrete. In addition, in the atmosphere, and therefore locked in air bubbles of ice cores from glaciers and ice sheets, there is a record of increasing greenhouse gases from fossil fuel combustion and emissions from agriculture, pollutants, and carbon-rich dust. The start of The Anthropocene is therefore determinable where the combination of anthropogenic climate change, atmospheric pollution, amount of disturbed land, ocean acidification, nuclear testing, deposition of plastic and concrete is worldwide, ubiquitous, and irreversible.

So when does The Anthropocene start? This is still debated by scientists (Ruddiman et al. 2015; Waters et al., 2016; Zalasiewicz et al., 2017), but the strongest evidence-based support has been offered for a mid-20th century start, either coincident with the first testing of nuclear bombs, in 1945; or with ‘the great acceleration’ in industrialization and population growth around the 1950s. Others have put the start with the beginning or height of the industrial revolution in the late 1700s or around 1850, where the latter also coincides with rapidly accelerating animal extinction rates, and not seen before rates of fossil fuel burning, climate change, and sea level rise. Some argue for an early Anthropocene corresponding to the earliest widespread agricultural practices and deforestation about 5000 years ago.

The Anthropocene within the unimaginably long geological time frame as well as in the context of our recent past and our all-encompassing present, raises a number of issues and questions related to the consideration of a – to some – wild/weird range of spatio-temporal scales and patterns.

Urbanisation has increased tenfold in the 20th century and in 2017 the urban population accounts for close to 60% of the total global population, with more than 75% of the populations in western industrialised living in cities. This means that from a natural and rural wildness-weirdness we move to a constructed and urban wildness-weirdness. Some of these spaces are now abandoned and desolate, and much of the wilderness-weirdness is now to be found in a neo-natural setting of post-industrial and perhaps even post- or parallel – anthropogenic spaces (aka Nick’s queer spaces or wastelands)

Important questions in the context of the Anthropocene, geological time and space, and from an anthropocentric context therefore are: 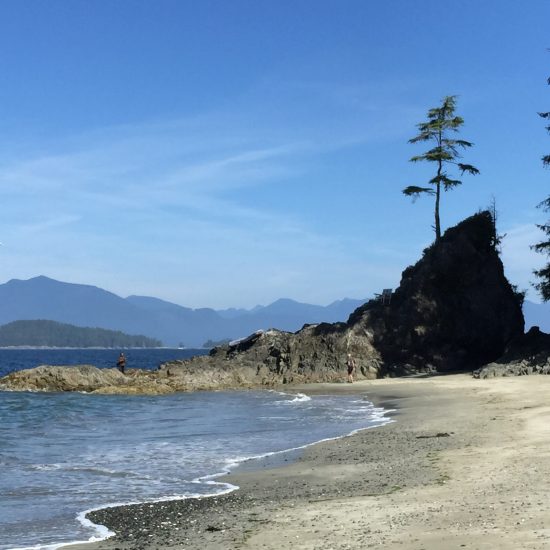 I proposed contour mapping with inexperienced bodies on steep slippery slopes. We walked around a stack surrounded by a rock platform. We were at Brady’s Beach at the West Bamfield Pacific coast. We started lined up vertically at 1 metre vertical contour intervals. Each had to walk their own contour and hand draw a one-line closed loop map of that contour. Each paced their own distance, were taught to use a compass as a direction indicator. Some walked a wide low loop, others a shorter higher loop, or a very short even higher loop. 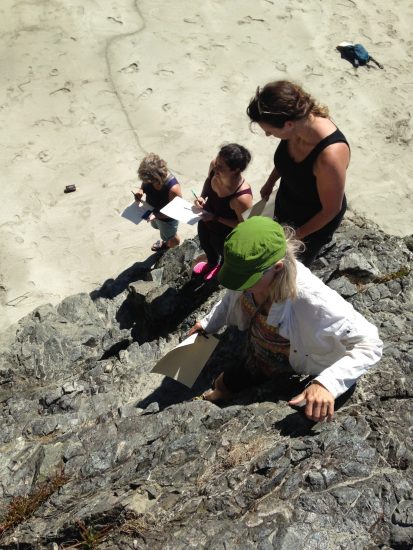 At the broad scale I intended to explore several things with this exercise: placing bodies in space using the space feeling the space being the space; finding new, perhaps weird, ways of process-based data-mining; and exploring some edge effects of boundaries between the body and air water and rock, going from vertical 3D space to horizontal 2D space not only with the hand that draws but with the whole body drawing line in the landscape. 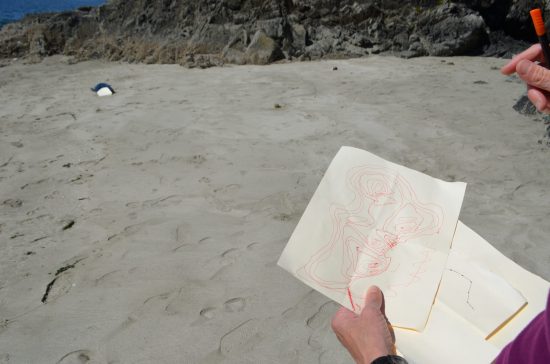 The expected outcome was a series of concentric contours that could be stacked upon each other to form a topographic map that resembled the actual landform. As an experienced field geographer I had not the foggiest idea how far the result could be from reality. The lines were all over the place and did not fit together at all. Unexpected results from not looking up? Once I realised the intended mapping didn’t work, a paradigm shift occurred – a freedom allowing to bring into existence a new combined map of something fictional. A weird wilderness. But one that had been experienced in process-based reality. 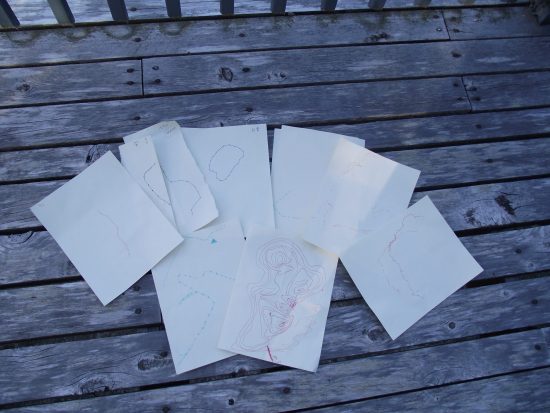 Scene TO be Seen, AND BE SEEN

I am most happy when I can be wild, unrestricted, unobserved, in the wilderness. To be timeless, no separation between wildness and me, wilderness and me. As a glaciologist I have seen the real wild (polar bear in camp; frost-nipped fingers and cheeks; remote survival; nature’s forces), and I have seen what a different effect it can have on different people. Wild, Weird and Wilderness are externally projected labels, but come with restrictions: we admire wildness, but only the slightly tamed version; we admire the natural forces, landscape, wild animals, but not the bacteria, the faeces, and the reeking marshes. It is, as Dagmar stated, the romantic notion of distant admiration, and not the submergence and non-separation; not us as an integral part.

Throughout my life I have put myself in wilderness and have learned to, and love to, feel comfortably uncomfortable. When I place my body in the wilderness I assume in some sense it is one with it. Then I explore extreme situations, suffering, and what it does it do to me, within me, outside of me. The following experiment was intended to expose myself to a different but similar kind of situation and uncomfortableness. An experiment in feeling comfortably uncomfortable outside wilderness/wildness, yet without weirdness. Being an integral part of the space given to me as a speaker.

I never watched, had heard of, or did a scientific talk in the nude. It is outside the social convention of academia. Being in the nude is no longer radical in art, but it is in science.
Yet, what is radical anyway if science has charted everything? Is there even wildness/wilderness/weirdness in science? With all the control, method, and protocol, it is actually quite easy to be a rule-breaker, queer, or a wild human, in science. 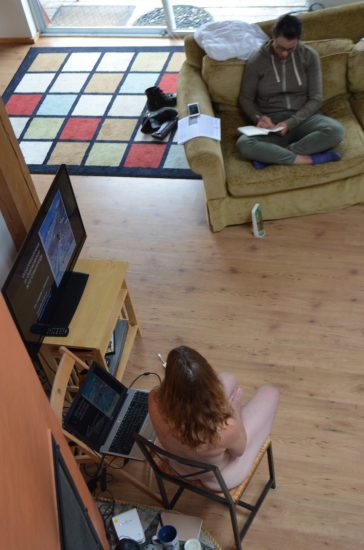 According to Aristotle the modes of persuasion, or rhetoric appeals, are Ethos, Logos, and Pathos. Ethos is an appeal to ethics and deals with the character and trustworthiness of the speaker. Pathos is an appeal to emotion by creating an argument or a passionate delivery that draws an emotional response from the audience. Logos is an appeal to logic by conveying facts and figures in a clear and accurate manner. Scientists generally focus on Logos and to some extent Pathos, but Ethos is usually assumed to be equivalent to the scientist’s credentials and scientific method used, instead of demonstrated in the scientific presentation itself. However, “Audiences view trustworthiness as the motivation to be truthful. Identifying whom to trust follows systematic principles. Perception of scientists, like other social perceptions, involves inferring both their apparent intent (warmth) and capability (competence).” (Fiske & Dupree, 2014). Lewis remarked after my talk that nakedness of the scientist increased the trustworthiness of the scientist and trust in the content. Are scientists more trustworthy when they reveal all, expose, or commit themselves to the uncomfortable closing of distance between speaker and audience. What when all scientists would try it?

Are you looking up? Into the deep space of geological time? Is it looking back down?