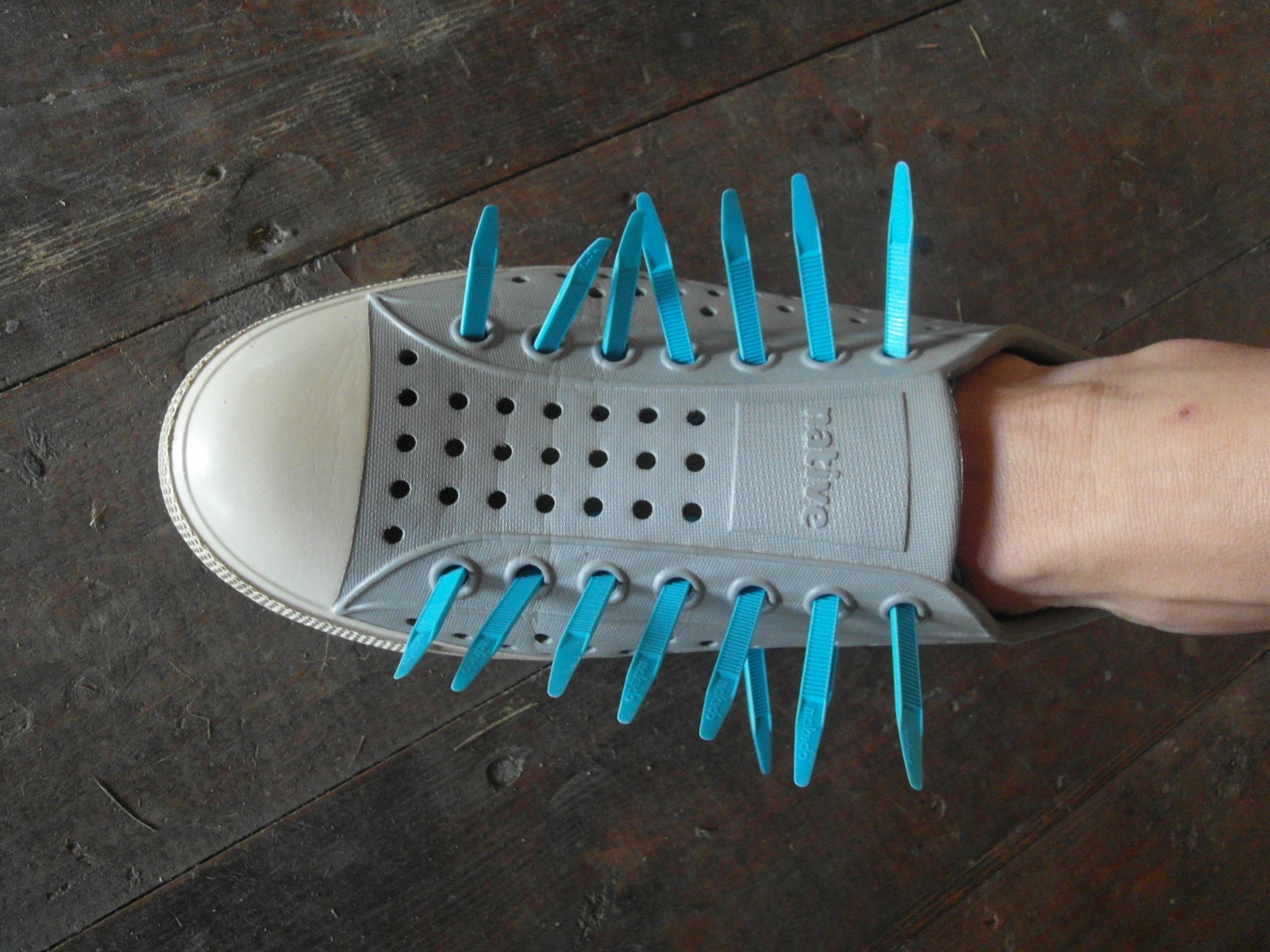 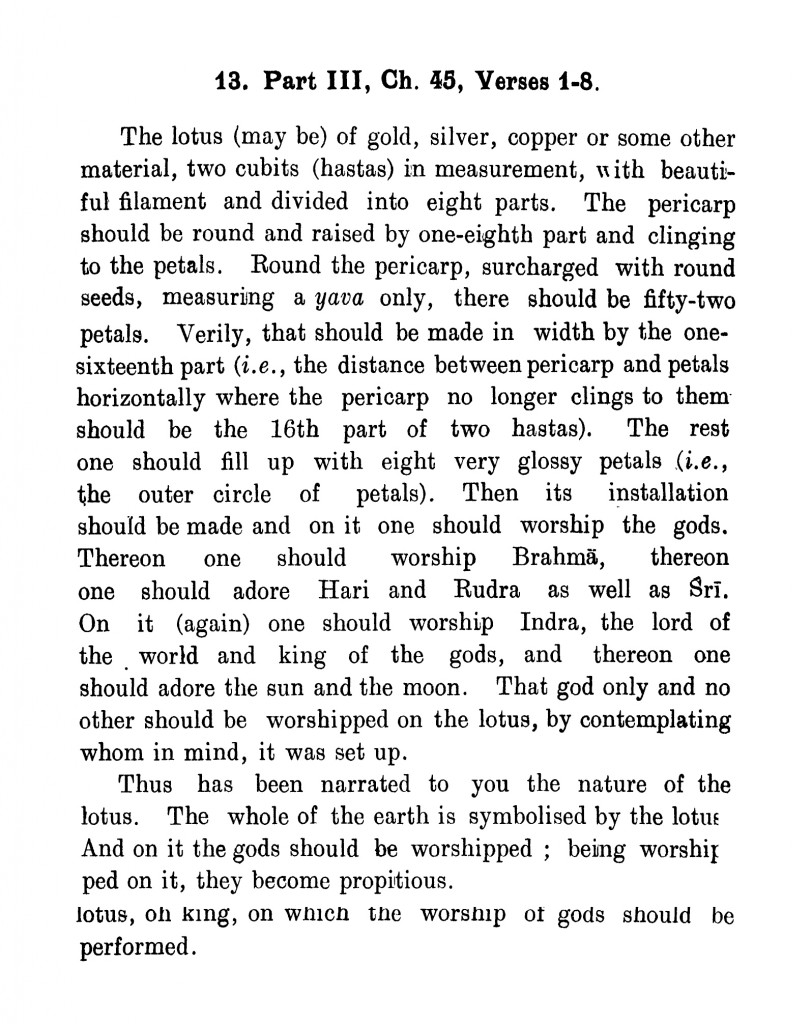 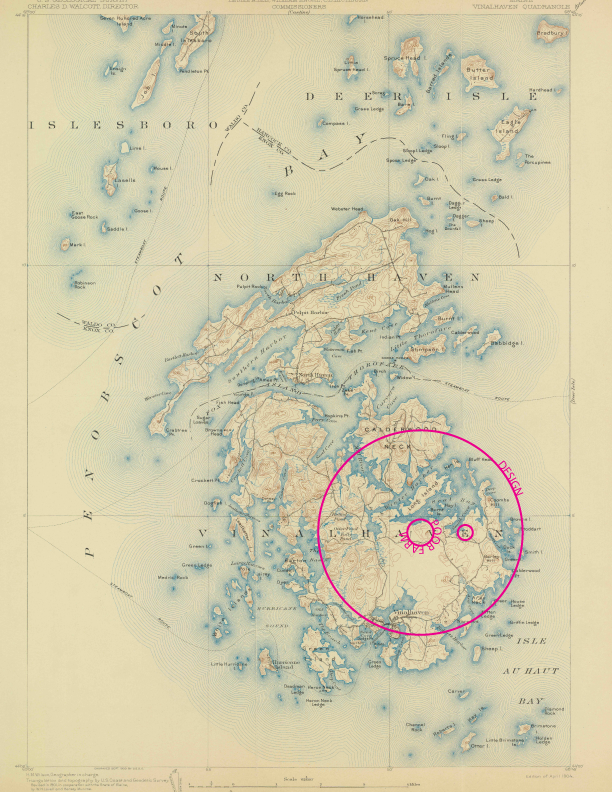 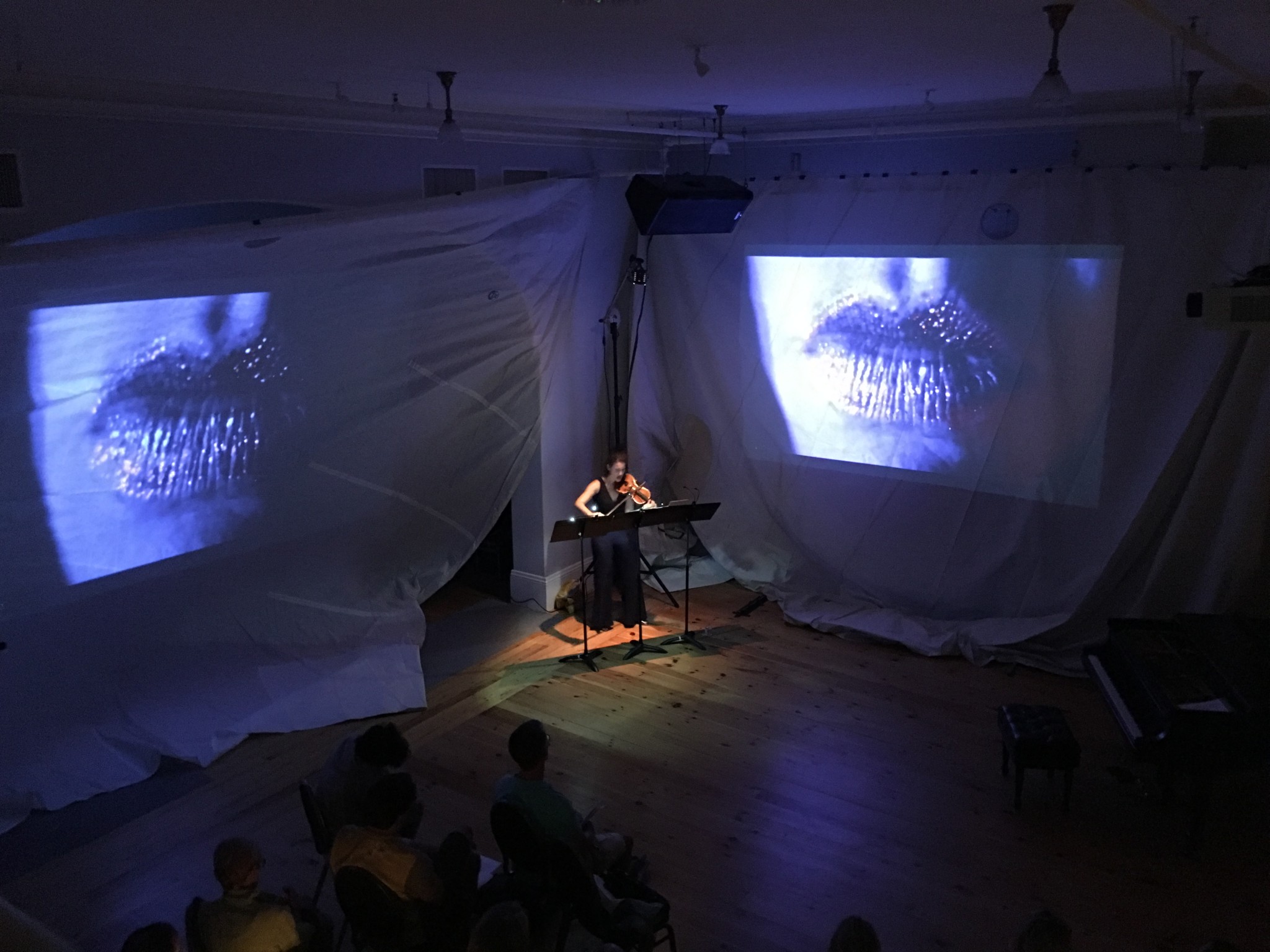 Violinist Rebecca Fischer and I have been working together since 2011. But we didn’t have the time or space to grow our collaborative practice into something more fully until DI’s 2016 “Productive Counter-production”. On Vinalhaven, we spent an intensive week shaping a performance where video projections and works for solo violin met in a very particular zone called “Time Pieces.”

Here’s how it started—

for Rebecca’s 40th birthday I commissioned 8 composers from around the country to write original works for solo violin. Augusta Read Thomas, Pierre Jalbert, Nico Muhly, Paola Prestini, Gabriela Lena Frank, Byron Au Yong, Lisa Bielawa and Rodney Lister delivered an extraordinary set of works ranging from lyrical pieces for solo violin to work for violin and electronic drone to acrobatic works for singing violinist (!). Rebecca was to premiere these works at Bay Chamber Concerts in Rockport, ME at the end of August 2016. As the project and premiere grew, the Artistic Director of the concert series, Manuel Bagorro, became increasingly interested in the two of us presenting a multimedia platform, a whole environment and world for the audience, something that brought our two practices together. And thus, “Time Pieces.” 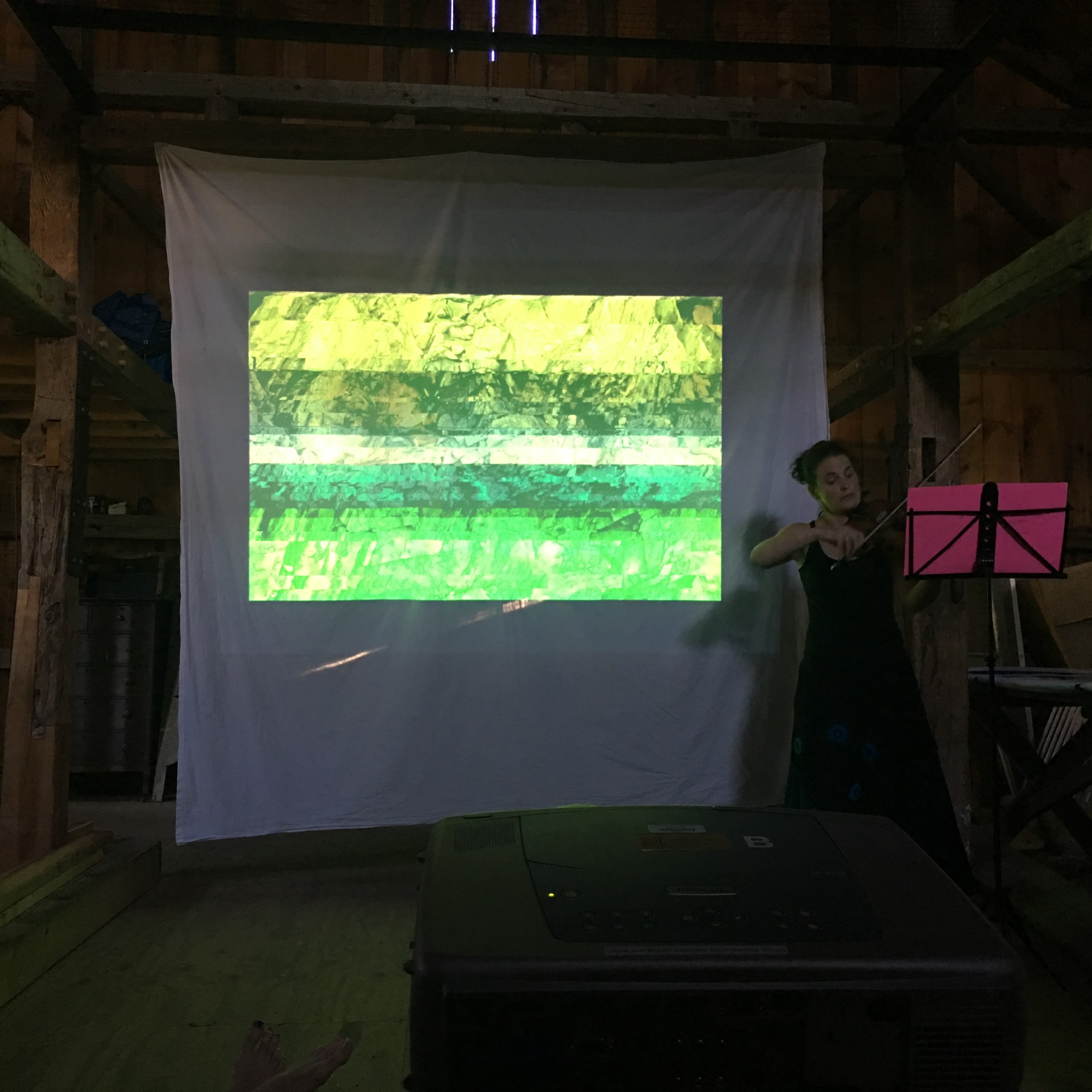 In 2011, Rebecca and I created a site-specific performance and installation in the hills outside of Assisi, Italy, but most of our collaborations have consisted of her appearing as a character in my larger works. “Productive Counter-production” changed this. She spent days finding the core of these works and their shape as I walked, listened to rocks, shot video, digital photo and medium format. Then we met, shared notes; Rebecca performed pieces for me and we got closer and closer to an interdisciplinary space where the video and audio played off each other in a way that was particular to each piece. Byron Au Yong’s “Water Partitas” and Augusta Read Thomas’ “Rhea Enchanted” had us attuned to ebbs, flows, and the passage of time (Rhea after all was the Titan in charge of all things that flow). It became more and more clear that the thing we were creating was about how we keep track of time, how we try to store and hold onto it, and how it so often evades us. 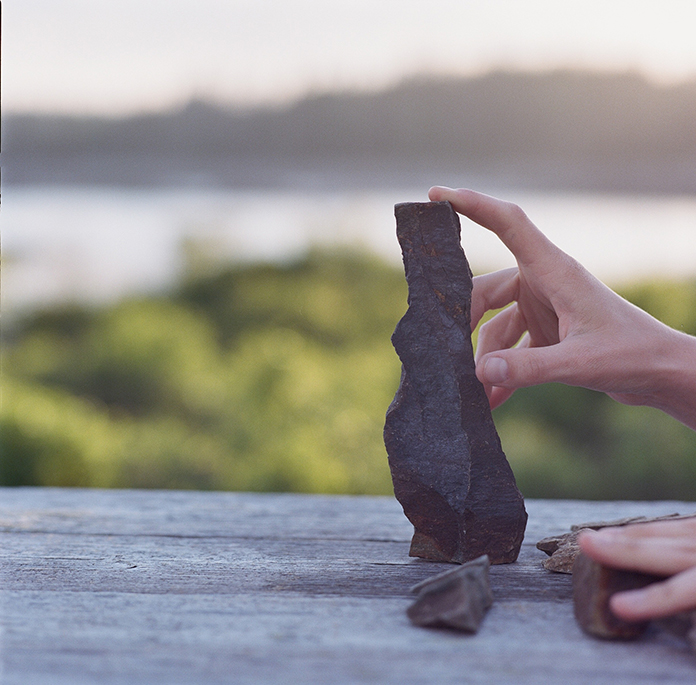 What we did too was start this thing—“The Afield”—a name to recognize officially what we’re trying to do. We like the idea of being “afield,” to wander farther afield beyond borders, beyond the area of “one’s subject” into uncharted territory, into other knowledge. Thus “the afield”, those things, areas, and people we cultivate. 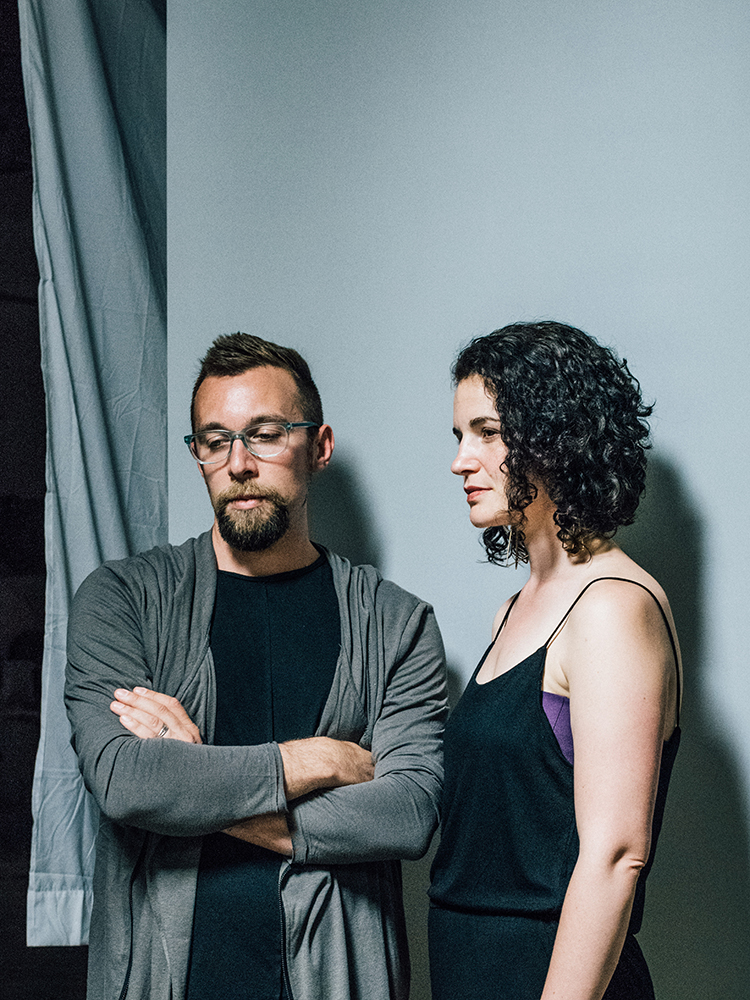