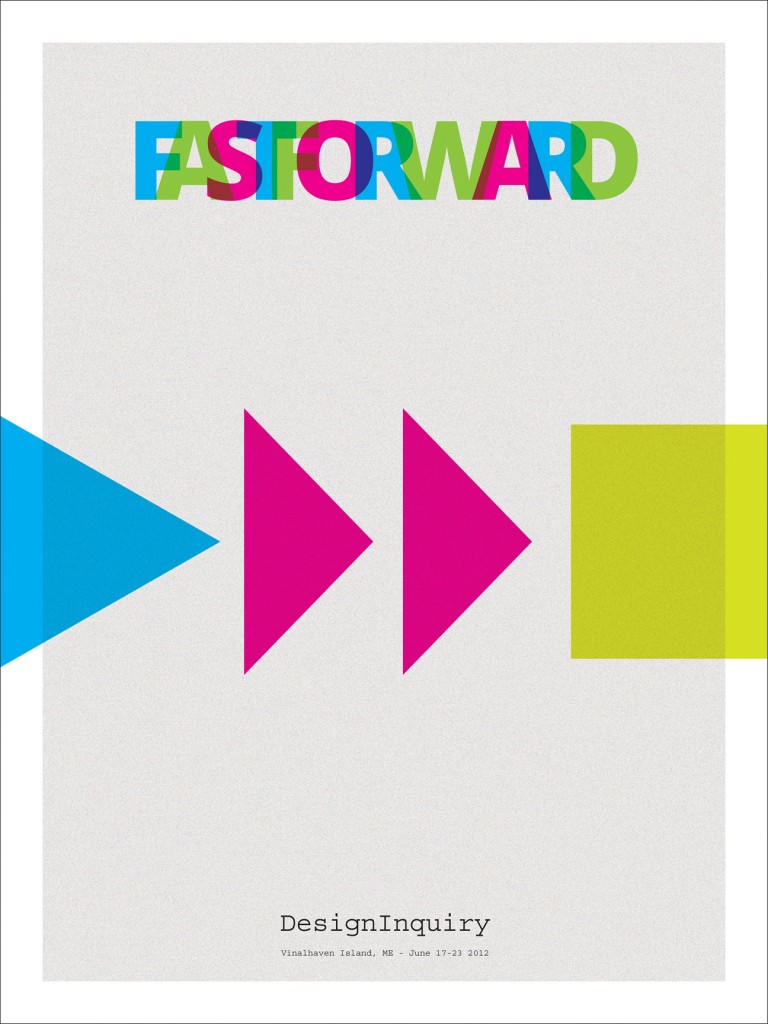 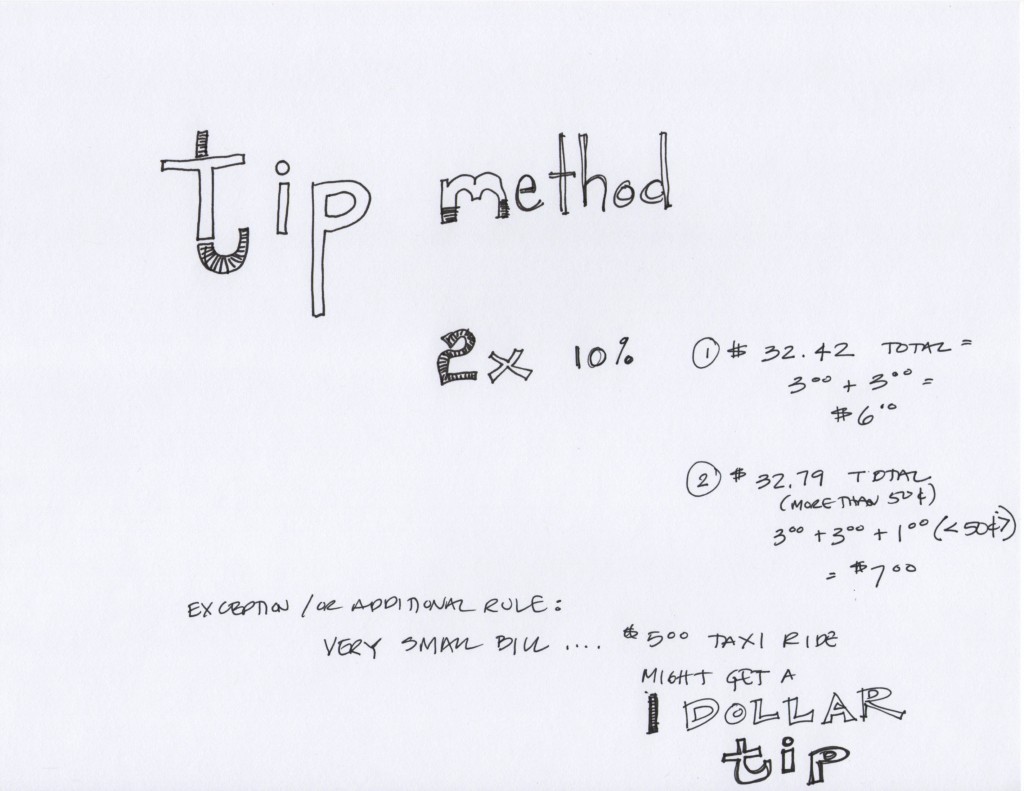 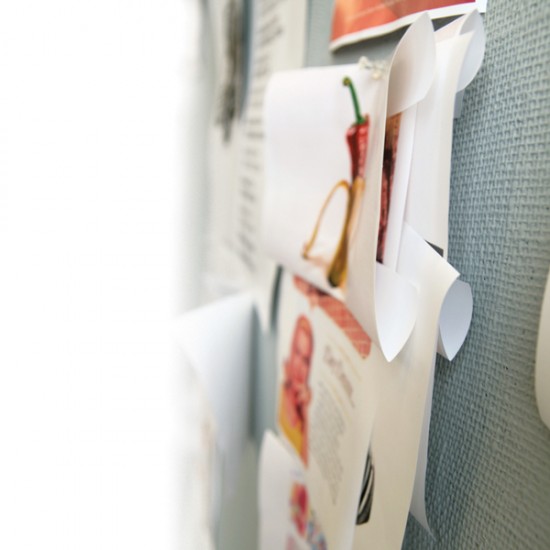 As a university design student “making” was my raison d’être. It was a ritual to trek up to my studio (in any form of weather) to meet a quota of the somewhat unrealistic number of explorations I aimed to meet daily early on in my career. I felt spiritually satisﬁed if I met my creative demands, and bitterly frustrated when I missed the mark. This regimented process was inﬂuenced by professors who demanded precision and per-fection on every project. I found their expectations impossible to meet, but reveled in the chance of getting “close”. Reams of paper, alcohol-based markers, and charcoal pencils were my initial tools for making that changed over time to become lay-out software and dozens of laser prints detailing my ideations. It was fulﬁlling to step back and marvel at the immense amount of work pinned to the wall. I found that the abundance of con-cepts was a signiﬁcant indicator of a successful design process and its bounty a monument to design. Years earlier, as a tennis player in high school, one thing I discovered almost immediately was that the more I practiced the game, the more matches I won. I made it a mission to scrim-mage against stronger and more seasoned teammates, hit the ball against my garage door, and sort through the mechanics of a killer serve (even without a racket) in my living room. It was this same work ethic that translated so nicely into my design process. Hitting a winning backhand was essentially the same as drawing a perfect circle, while a good rally was equivalent to three hours of solid concepting. Some students found their creative juices gurgling in a keg, I found mine in the countless hours of drawing and creating miniature mountains of sketch-books. Less wasn’t more. More was better. As a design professional I still cherished those tenets of investigation and experimentation that were instrumental in my maturation as a creative. Working in big and small studios as well as large corporations reﬁned my skills and increased my vocabulary. Understanding manufacturing and printing processes revealed more about the profession that theory never covered in school. The bigger the press run, the happier I was. The more printed work, the better chance the world would see my efforts. It become an insatiable thirst to design more. I took on freelance outside of my day job and found myself working into the night. The more work I made, the happier I was. However, one day as I checked my mail outside of my apartment, I found myself throwing away the very design work I created on my job. In the trash bin in front of the bank of mailboxes lay even more discarded and unappre-ciated pieces of direct mail. My neighbors had the same reaction to the beautiful print pieces selling cellular phone minutes that I did. Was I making trash? Consequently was I then creating too much? It was a question that I really didn’t want to address. The answer could very possibly throw my perfectly acceptable world of making out of orbit. Whether I wanted the answer or not, the facts are undeniable.

Faced with all the gory statistics, I used to simply and somewhat naively believe that designers can solve our resource and affluence issues by simply just designing less. Smaller packaging that is effective can equate to less money spent in shipping (due to a lighter weight) and also on materials. Designing to minimize materials means less waste, less pollution and can in many ways be more efficient in its simplicity. However despite smaller posters, slimmer magazines and reusable bulk packaging, the end of life disposal for all these pieces of ephemera is the municipal landﬁll. Less isn’t enough. Despite the positive intentions, its only a step in the right direction. Moreover as “makers” how we can we rectify our innate desire to create? Designing less in it’s purest form – slowing or at worst stopping our creative process – impacts our pocketbooks and starves ourselves from the outlet that ignited our interest in the profession to begin with. Designers tend to solve problems with material objects. The designed artifacts solve smaller problems within a system of other problems, however they are really only bandages mas-king a deeper and possibly more sinister issue. Moreover, these objects in turn create new problems if not fully thought out. Slick and trendy magazines deliver relevant and important con-tent to its readers, but rob our landscape of a forested skyline, and pollute our air in its manufacture. Planting new trees to replace those removed allow for more magazines, but displace the wildlife and biodiversity of the area until they mature – dis-rupting parts of the fragile food chain in the meantime. The automobile allowed for faster transportation from point A to point B, and helped ignite our economy, but also has killed mil-lions of wildlife and people. More seriously the automobile has helped alter our planet’s atmosphere effectively changing our climate. The problems of disseminating information and trans-port are system problems. How do we visually distribute vital information quickly and to a large group of people effectively? Once we get that information, how can those affected quickly and safely move to where they need to go based on what they’ve read/seen? The two need to work together. It is at this juncture in which I believe a new opportunity for exploration exists for the grahic designer. Redesigning broken systems and creating new means of connecting are ripe for exploration considering the 46.6 percent drop in print buy-ing by 2009 advertisers1. Graphic designers are already astute at working with systems, so the translation to larger and non-tangible solutions can be a relatively painless jump. Daily we work with a system of type (the alphabet) and grids to produce the digital and print material we have created effectively for decades. Designers also utilize systems of icons, colors and messaging to communicate brands and those working online understand systems of programming languages that allow for images, animations and layouts to be seen on screens ranging from a theater to a mobile device. The challenge with designing larger systems lies in the acceptance that the graphic design profession is slowly chan-ging. Change isn’t easy, and at times avoided when comfort and habit is confronted. This was initially my reaction (disdain) to the fact that designing more artifacts has inherent ﬂaws after ﬁnding my direct mail piled up in an outdoor garbage can. However, I felt conﬁdence in knowing that the theories that for-mulate the foundation for the design process enforce the idea of research and thorough investigation, which were integral in helping print design move to the screen and now to a more systems-oriented approach. The holistic nature of the design process is deﬁnitely needed to help design better systemic solutions for bigger issues like water rights, affordable and sustainable transportation systems, renewable energy pro-duction and dissemination etc. These issues are ones that not only impact the longevity of the graphic design profession but trouble our society in general. As we are faced with dwindling resource issues that will hamper our ability to create printed pieces and packaging, we must be ﬂexible enough and ready to jump on and lead within the next innovation, similar to how we succeeded with our transition to the internet and web design. Understanding how our pieces are printed and how paper is manufactured show knowledge of systems. However, those sy-stems appear to have broken over time due to shortsightedness and currently need our help to remedy. Designing immaterial solutions is the next and most logical step for the graphic designer. As our current printed posters and social justice websites encourage people to recycle, what seems to be more important is to not tackle the symptom of the systemic problem (waste) but instead design a better ma-nufacturing and dissemination system that eliminates the need in the ﬁrst place. Creating better communication and awareness may not be solved by iChat or the iPhone but instead by the reinvention of our public education system and how we relate to our neighbors based on the planning of our communities. The magazine may relay important information but lives in a ﬂawed system of existence. Solving that problem may create new opportunities for creation that allows my mantra of “more making is better” to be true. The key is to begin this movement in schools, daily practice and conference discourse. It might take an enigmatic leader to forge ahead through example or simply more and more practice. Without that I wouldn’t have achieved such an effective backhand.